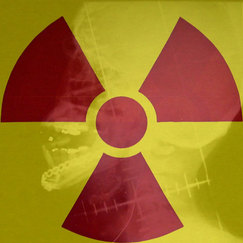 To understand how a radon mitigation system works, a person should know why they have elevated radon levels to begin with.

NRPP Radon Mitigation Standards specifically state that a radon mitigation system has to comply with 4 rules.

#3 "be 10 feet or more from any window, door, or other opening into conditioned spaces of the structure that is less than 2 feet below the exhaust point". { this means a release point must be Either 2 feet above Or 10 feet away from any openable window or door. }

​#4 " be 10 feet or more from any opening into an adjacent building. The total required distance { 10 feet } from the point of discharge to openings in the structure may be measured either directly between the 2 points or be the sum of measurements made around intervening obstacles. Whenever possible, the exhaust point should be positioned ABOVE the highest eve of the building and as close to the ridge roof as possible".

There are 2 ways to power the fan in a radon mitigation system. 110 volts or 24 volts, basically high or low voltage. Pikes Peak Radon only installs 24 volt systems. The power usage in both systems is the same. The advantage to a 24 volt system is not needing a certified electrician to wire the fan. Improperly wired high voltage appliances outdoors in Colorado can be problematic.

Several radon mitigation companies install 24 volt systems. The difference is in the details, strict adherance to rules and regs and of course the craftsmanship involved. As you look at the pictures of Pikes Peak Radan installs you will notice the difference. 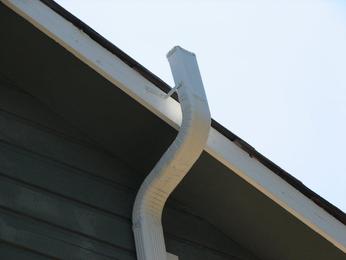 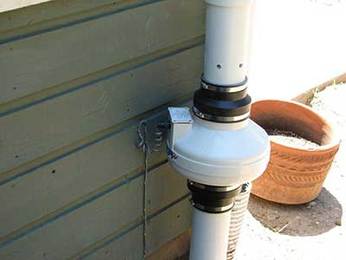 The details and craftsmanship are numerous. Here a fan power supply cord is fastened to the building, a 'drip loop' created and a coil to connect to the fan. The system is painted white for a finished look. 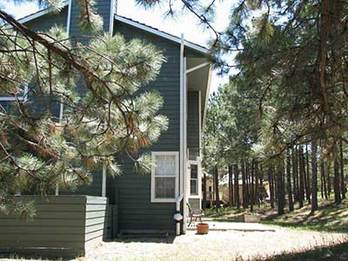 Pikes Peak Radon paints every system they install. Be it tan, white, brown or a paint color supplied by the homeowner, everything visable except the fan and connecting bushings gets painted. When a radon mitigation system is built with care and attention to every detail it can blend in with the home and almost disappear. Pikes Peak Radon installs custom systems that not only look good but work well.